After several months off due to surgery and the business of family, friends, work, and other related events, I finally got back on the wagon and decided to do creative shoots again. The first one I wanted to do was one I did not think would be too difficult. Boy, was I wrong!

The Understanding of the Three Fates 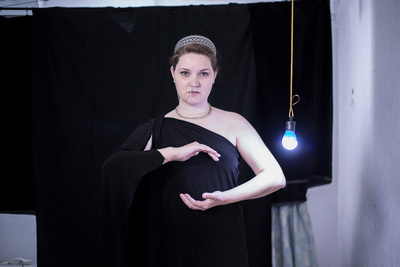 The photoshoot was titled the Three Fates (also known as the Moirai). It revolved around the Grecian myths about Clothos, Lachesis, and Atropos, the three goddesses that were in charge of human mortality. Clothos spun the thread, Lachesis held it, and Atropos was in charge of cutting it.

Although many of us remember the three Fates from Disney’s Hercules movie as old crones that shared one eye, I decided that I wanted to make them younger appearing, and far more beautiful. Many quotes have included saying things like death is a seductress in the night and I wanted to embody that concept within the photo. I also wanted it to be one model that would be used to photograph all three, similar to the concept of the Greek goddess Hecate (maiden, mother, and crone) or the characteristics of one individual. I liked the idea, since the three Fates are always seen together and rarely anything else, that they could be triplets clouded in darkness.

The Concept and Shoot

Being that it was my first shoot in a while, it took a long time to prep and I didn’t do it the way I liked. I wanted to dangle a lightbulb in the photo as if it was a soul and have the three Fates be back to back in the photo like a reflection or triangle. Unfortunately, I noticed that putting the light bulb in the picture changed the lighting in the photo and exposure. I turned the lightbulb off and on for different poses and this also messed with the exposure. I plan to try this photo again and when I do, I will take the picture once and mimic the same settings in manual mode. I would also like to set up my tethering to the computer so that I can see my photos in a bigger picture (the braided Fate in the photo was slightly blurred due to me throwing on a light during the shoot). 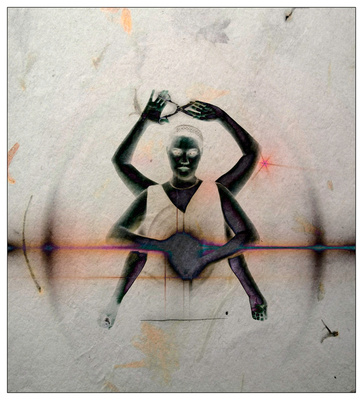 I also plan to try a prime lens and a zoom lens for the shot. I could try to decide on directional light (soft) but I should probably practice that beforehand. I do like the way the light bulb illuminates the characters but wouldn't mind putting a small light near the bottom of the photo and darkening the background a bit so that it is easier to dodge and burn later on. I can also keep the light in one spot, regardless of which character is there, and see if there is more blue added to them.

I want to also see about dangling the light in a few areas so that there is more than one light in the photos (like souls surrounding them). The nose chain was pretty, but it was lost in the photo later on so it should probably be ditched. I also need to make sure none of the dresses have sleeves that could cover up another arm in the photo. I could also spray paint the scissors and make the thread thicker and more noticeable. It did come out as a decent photo, but I am convinced that I can do better...and I want to do better. This is about pushing myself to be the best, even if I have to repeat myself and fix my mistakes in the process.

I have already talked to Bethany (the model for the shoot) and she has agreed to come back and redo the shoot. I hope to prep the shot beforehand so that it is quick and easy to get it all in. I think one of my major problems during the last shoot was that I was lazy and didn’t prep beforehand so instead of focusing on the shoot, I was running around grabbing pieces instead.

What to do for next time:

The Three Graces (my next shoot to work on) should be easier because I can flood the room with light and use that to my advantage. Regardless if I use all white or a sky background, the background for the photo will be white.

In my quest to understand what makes the best picture, I have placed two photos from this shoot with completely different edits. The one on the left has a natural edit in photo style whereas the one on the right was geared to appear more like a comic book or graphic novel. Please let me know which one you think is better in the comments below. 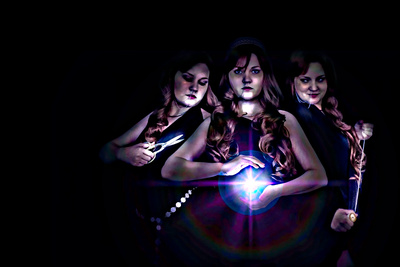 Melissa Damon
Thank you so much for the compliment! It means a lot to hear!
Douglass White(non-registered)
Glad to see you doing more photography, you're very creative. I like the second one for its contrast between light and shadow, especially the way it highlights the wavy hair.
No comments posted.
Loading...
Subscribe
RSS
Recent Posts
December 2022 November 2022 - Giving Thanks... October 2022 - Living in the Moment September 2022 - The Start of Something New... Weekly Update - June 6th through 12th October - The Family Meal The Sailor Moon Photoshoot The Blue Guard Running Across the World The Wraith
Keywords
photography balbombiel art fine damon melissa fantasy photo shoot fall
Archive
January February March April May June July August September October November December
© Melissa Damon
Powered by ZENFOLIO User Agreement
Cancel
Continue