After my original Three Fates shoot, I desperately wanted to make the Three Graces as perfect and beautiful as possible. I had many changes that I wanted to make for this shoot, and although I did many of them, not all were completed and I felt as though it showed in the photos. Honestly, I was pleased with the photos through a fine art perspective, but it did not come out the way I had originally imagined. It wasn’t perfect, but I am a die core perfectionist so I highly doubt anything would be perfect to me. 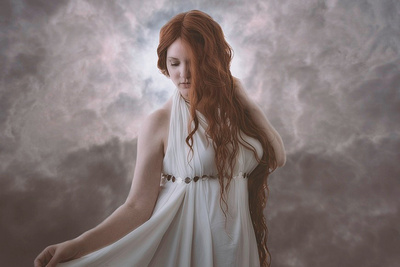 My model for this shoot was Bethany McMahon. Although this is my first time working with her directly, I have actually known her for years and have seen her working firsthand in both fashion shows and photography. I could not think of a better model for this shoot as I needed someone that could act as well as look pretty for the camera. Some of the embodiments of the goddesses needed to be young and innocent, while the others needed sneaky and arrogant personalities. Beth is one of the few models I knew would be able to pull this incredibly tough job off….and she did it in spades!

The original concept for this shoot was the three Graces (also known as Charites) from Greek mythology. They were three minor goddesses that usually hung around Venus/Aphrodite (Goddess of Love/Beauty) and represented charm, beauty, and creativity. They have been painted/sculpted many times by master artists like Botticelli, Raphael, Antonio Canova, and many others, and are usually viewed as blessings for a wedded couple.

When I created the concept for the shoot, I really wanted to evoke a similar idea to the goddess Hecate where she represents the maiden, mother, and crone in one form. I would make the three of them into different attributes of a woman. To further this concept, I chose to use one model to represent the three as if they were triplets. 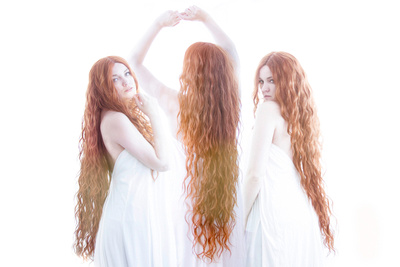 I was also doing this photo concept directly after a different shoot called the Three Fates. When I shot the Fates, I purposely used the same model as the Graces because I wanted to have a chiaroscuro (dark and light) feel to the entire thing. I envisioned them sitting side by side at a gallery event: one in white and one in black, contradicting each other with a beautiful allure. The Fates were photographed in black fabric with a black background while the Graces were photographed in white fabric using a white background. I wanted to embody light, purity, and simplicity in these photos and give them a ‘clean’ feeling. I also wanted the Three Graces facing each other as if they were going to dance because they are usually dancing or embracing in most depictions of them.

Originally, I thought of using the beach for the shoot on a cloudy day, but I wanted to practice using floating lights so my studio at home was the best idea. The Three Fates shoot was done in the studio so Three Graces needed to mirror the original shoot. It also made since to choose a location where I could easily place the model (Beth) in three different spots easily while controlling the elements.

The camera was placed on a tripod and I set the ISO/aperture/shutter manually so that the settings would remain the same for each set of photos. Beth stood in the center of the room and I had the white background a few feet behind her. The photos were shot straight on and we changed her clothing/hair/position for the two other Graces and then took the photo again. 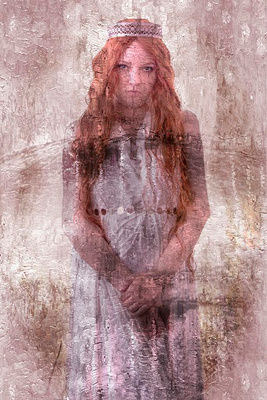 There really was no costumes made for this shoot. Beth wore a simple piece of fabric that was draped in different ways on her body. The necklace was something old that I’ve had around the house for years and the crown was a piece of metal trim that I found and bent into a circle. I did have a crown in mind for this shoot, but I was not able to locate it. Also, at the beginning of the shoot, Beth wore a beautiful nose ring that had a thin chain that attached to her ear. We ended up taking it off because it looked like a stray hair in the final photos.

When it came to editing, the three photos were merged into one using photoshop and as steady of a hand as possible. I really did not do much for editing other than nudging an upper arm here and there, and chaging a frown into a smirk. For several of the fine art pieces, I used textured layers and Smart Photo Editor.

Learning for the Future

If I had a third shot on this shoot, I would have done it at night with a single light for the scene to make the shadows darker. Although it was smart to do the dark photos in daylight so that I would have little to no noise in my photos, the drama in the photo was decreased in the process. For the lighter Grace shots, I had a happy accident and overexposed my first four shots. The results were actually some of my favorite photos and I may repeat it in the future as I loved the high key angelic appearance of Beth in these photos. The photos that were the correct exposure were nice as well, but they didn’t hold the same kind of ethereal magic in them.