Several weeks ago, Mike Donatello contacted me and asked me if I wanted to start shooting again. This worked out well as I was already doing a photography training class that was helping my alter my craft and I needed to get my practice time in. It also didn’t hurt that we were both stuck at home due to social distancing with the dreadful Corona virus.

We chose Aaron Hayes as our model and met at Fort Shantok (Uncasville, CT) park. It was May 3rd, 2020 around 1:30pm. The sun was out in full glory so we chose to use a patch of pine trees that were littered throughout the area like a pinball machine.

This made it really tough for getting the right exposure for the shot because the highlights were blown out. You would figure that it would be the sun spots on the ground that lit up my highlight alert like the Fourth of July but no, it was the horizon that did me in. I had to get creative to make sure that I could get the picture.

Aaron was suited up in scarves, robes, a baseball cap (to give the illusion of a longer face under the hood), armor, and so much more. The goal was to appear like one of the Wraiths from Lord of the Rings. I also was reminded of grounded dementors as well.

The photoshoot went well and we had it done in about an hour. I tried out some techniques of holding tree branches in front of my lens to get a bokeh look to the photos, but it did not add to the photos in this shoot.

After the shoot, I went home and began editing. For some reason, I felt as though the photos were too bright and green. It made perfect sense as this was taken during the beginning of spring when the leaves are more of a bright green/yellowish look. I choose to do something that I have never successfully done. I wanted to turn my super bright sunny shot (one of the toughest shots to take due to bleaching out scenes) and change it to a night shot.

I was worried that it would turn into the Slipper and the Rose scene where Cinderella is singing and dancing after the ball and you can tell that it was daytime and not night by the patches of sunlight in the background. You are supposed to be so enthralled with Gemma Craven that you don’t notice, but I did after my billionth time of watching it.

Ironically, it came out pretty decent. The photo does appear like a composition due to the gray line around my wraith. I’m guessing it is the sun highlighting the back of my character and it has turned grey with my edits. If I erase it, it will make the photo appear unfinished so I have left it in. I also wanted it to have a painted effect so I used some Lightroom presets as well as Photoshop color lookup filters. I also added fairy lights. I was debating whether to keep it the blue or add more color to it so that viewers can see it better. 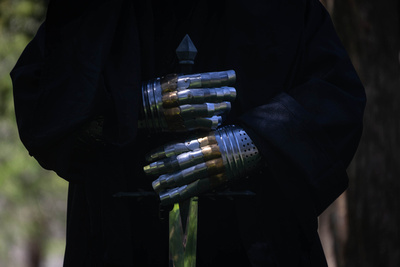 Overall, I am happy with the photo but I may revisit it in order to see if I can fix the line that I mentioned before. My goal is to make my images the best that I possibly can.

It is intriguing how a wraith is supposed to be a ghost or specter according to the Merriam-Webster dictionary. They are known to be made of gas or see through form. I believe that wraith means misty and it is of Scottish origin. This makes me think that I should re-do the photo to make it less visible. I could return to the location and try to retake that exact spot, or I can just clone it.

Wraiths in mythology are often made by dark spells. They are known for feeding or attacking other people’s souls.

In Lord of the Rings, the wraiths were the human kings that were trapped due to the rings of power that Sauron gave them. They were known as the Ringwraiths, Dark Riders, the nine, and/or the Nazguls. They had several different forms but one of them is definitely a hooded figure with a dark cloak that has a sword and gauntlets. (5/17/20) 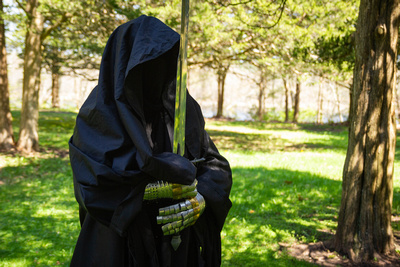