The blue guard was our second photo for our test runs and we did it on Mother’s day. It was a decent sunny day and I was so glad that Mike asked us to do the shoot because, if it was only me, I wouldn’t have done it. I was definitely feeling lazy that day. The inspiration for the shoot was the seige of Gondor from Lord of the Rings. Aaron (our model) was supposed to be an officer. 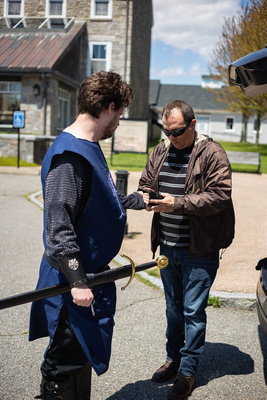 That is part of the beauty of being part of a team. If I was doing half of this stuff just by myself, I don’t know if I would be able to get it all done. Being part of a team means that I have to be accountable and get my butt outside, even when I don’t want to.

My son didn’t join us this time so Aaron and I drove together to Fort Trumbell in New London, CT. Originally, this was going to be part of the wraith shoot from the previous weekend but we thought that it would be too much to travel between the towns, locations, and costume changes with the same model. It was split up into two weekends to make it easier.

There was not much for people at the location and we were able to suit Aaron up in all of the armor for the shoot. It was bittersweet to see some families meeting in the parking lot to spend the holidays together while maintaining social distancing. They sat in small groups at the backs of multiple cars, wrapped in blankets and smiling at one another.

We suited up and made our way over to the Fort itself. I was immediately disappointed to discover that the inner courtyard of Fort Trumbell was closed. My original game plan for the shoot involved the stairwells inside the outer walls. It didn’t cross my mind that the Fort would be locked up as I consider the inner courtyard to still be outside. 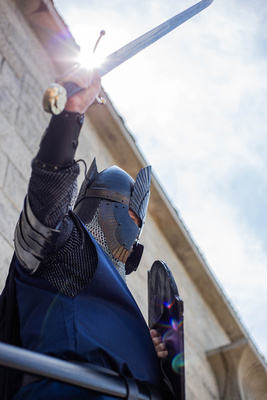 This put a large damper on our plans but we shot at the front gate and the side of the building to make it work. They sun was harsh and I tried to use it to my advantage in some shots and avoid it altogether in others. It made the shoot shorter for time, but left us a little wanting for some of the shoots. Although we were able to improvise and get good shots, this was a valuable lesson that I always need to check the location before the shoot. I try to make this process part of every shoot, but sometimes things just happen.

Part of the armor was actually created by Mike. I know that he created the shield for this shoot although he has created the armor in some of our previous works. It is always neat to get the opportunity to photograph his work and we hope to shoot more in the future.

We definitely want to do this shoot again once the Fort is open. It also inspired me to do some sword shots in the future as well, especially Excaliber ones. I find it intriguing how, even though we got a lot of decent shots, my favorite photo was a perception shot with a sun flare. 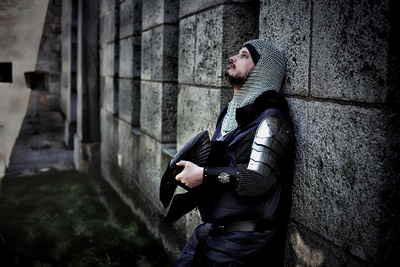